Alchi Monastery is also known as Alchi Gompa and is a big Monastic complex which is situated in Leh (Ladakh’s capital). The specialty of this complex is that it’s one of the oldest Monastic complexes in India and it has 4 separate sections all of which have been built during different time periods. 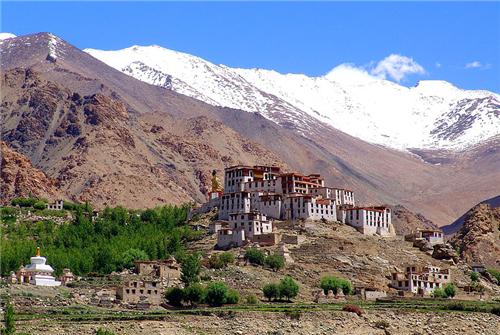 The exact date of the construction of the Monastery is not known though it is estimated to be 958 to 1055 A.D. The Alchi monastery has unique style and beautiful artistry which attracts tourists from all corners of the world.

There are many historical versions of the creation of Alchi monastery but here is the most verified one. The Chinese scholar Rinchen Zangpo who existed in the 10th century took the initiative of creating the Alchi, Lamayaru monastery and the Wanla. The erstwhile Tibetan king Yeshe Od was interested in ensuring the spread of Buddhism in this part of the world and so appointed 21 scholars to do the same. Unfortunately many of these 21 scholars succumbed to harsh climatic conditions and Rinchen Zangpo survived. 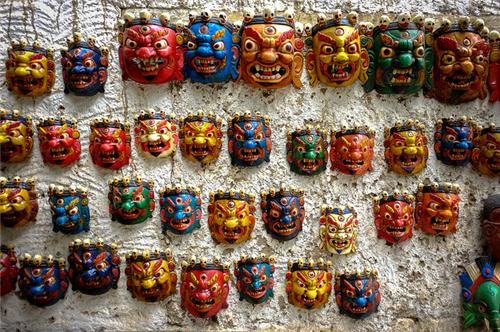 Zangpo soon attained great fame and came to be known as Great Translator. He then built his own network of artists, painters and sculptors to build 108 monasteries in the Trans Himalayan region. However most of the monasteries too crumbled down with the passage of time and Alchi monastery is one of the survivors. The Alchi monastery was first run by the Kadampa order and then by the Gelupka order.

There are 3 prominent shrines in the monastery complex; Dukhang (the hall of Assembly), Manjushri temple and Sumtseg. All these shrines were built between the 12th and 13th century. White cylindrical tomb like structures containing precious Tibetan scrolls and other artifacts are called Chortens. There are many such Chortens in the Alchi Monastery complex. Apart from four shrines the Lotsabha Lakhang and Lakhang Soma (2 beautiful temples) are also present in Monastery complex. 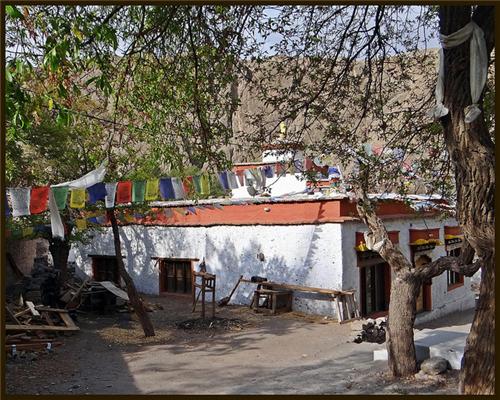 Some of the world’s best examples of Buddhist artistry are found in Alchi Monastery. The images reflect the spiritual inclination and artistic sensibility of Kashmiri kings and Buddhist monarchs. The walls of Alchi monastery are filled with gorgeous wood carvings and resplendent paintings made of wood. The United Nations has named Alchi Monastery as one of the best foreign representation of the Baroque art movement. Some of the paintings in this monastery are counted amongst the oldest artwork in Ladakh.

The original centuries old door frame of the assembly hall or the Dukhang is still retained and it is full of intricate Tibetan inscriptions and religious text. Though the assembly hall was constructed in the 10th century structural additions to it were accomplished during 12-13 Th century. There is a beautiful Colonmandel veranda which connects the front courtyard to the hall. Frescoes of 1000 Buddha’s are depicted with amazing detail on the walls of the hall. Buddhist and Kashmiri spiritual symbols of wheel of life and Mahakaal are depicted on the passage. There is a gleaming yet ancient deity called Vairochana in the main hall and 5 Tathagatas or Paanch Tathagatas are enshrined in colorful intricately designed Mandalas. You can see paintings of greater and lesser divinities, Goddesses, Gods, Buddha’s and Bodhisattvas along with spiritual Gurus and Dharma guardians on the walls.

Tibetan scholars are still figuring out the significance of the Sumutseg structure though it is one of the loveliest parts of Alchi monastery. The storied building of modest proportions was built with naturally burnished stone and Loam. The woodwork, column design, façade artistry, clay work and images are all fine specimens of Kashmiri work. The 3 niches in Sumtseg depict 3 vertical structures of Bodhisattvas. Four associate deities and two flying goddesses are also represented in the niches. 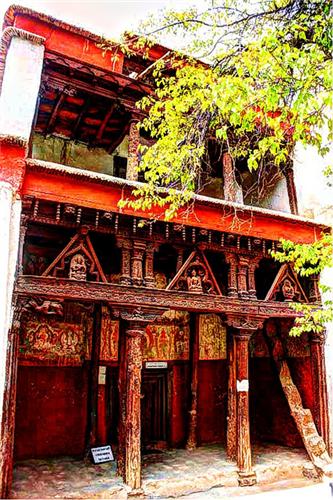 Only the main wooden door of the top floor is broken away but the rest of the Sumtseg is in a pretty good shape. The building has a second floor with a gorgeous image of Maitreya (center), Avalokiteshwara (right) and Manjushri (left). These are 3 principal goddesses of Buddhism and they are shown wearing Dhotis with spiritual and royal imagery on it. The Dhoti of Manjushri is of special interest as it has 84 Mahasiddhas inscribed on it. Maitreya is supposed to depict body while Avalokiteshwara denotes happiness and Manjushri denotes emotions.

This temple dates back to 1225 AD and it is also known as Jampe Lakhang. There are 4 gorgeous statues of Manjushri that are situated back to back on an elevated platform which is 5.5 meter in length. All principal images are enclosed by pillars and the ceiling of Manjushri temple has images similar to those found in Sumtseg. Later in the 13th century a small structure called Lotsaba temple was added to it. The overall atmosphere in the temple is that of religious ferocity and there are decorative scrolls bearing images of Gods, kings, religious traditions and animals all around. All temple deities are painted in brilliant colors. 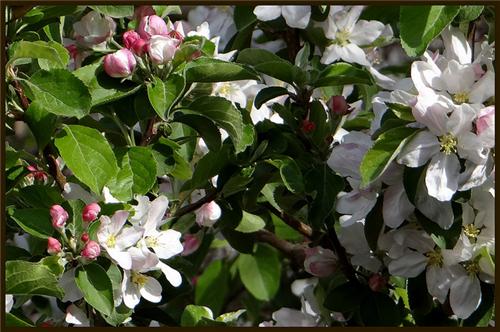 Each statue of Manjushri is designed with a single head and 4 arms holding bow, arrow, and book kept on lotus and sword. Manjushri deity sits on a lion throne and flanked by holy images of Amitabha and Aksharabhya. Manjushri is adorned with beautiful jeweler made of pearls and other stones. The depiction of 7 jewels and 8 signs of suspicion are engraved in the base of lion throne. There are mountings of Makara on top of the throne.

How to Reach Alchi Monastery

The best way to reach the Alchi Monastery is to take a 2-3 hour drive from Leh and arrive on the left bank of Indus River. It’s best to take along a trained guide who is knowledgeable about Tibetan religious history if you want to gain good knowledge about this monastery.