The assembly hall of monasteries is generally called Du-Khang. The assembly hall of the monastery is one of the oldest structures in it as according to Buddhist architectural principles it is the hall in which prayers are performed. In Buddhism different kinds of expressions of Music and chants are used to signify different religious events and rituals in a person’s life. 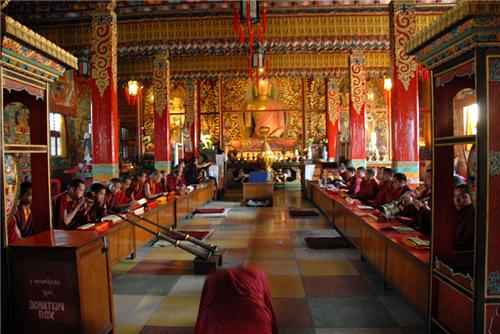 In Leh which is a very spiritual place the Du-khang of every Monastery plays a very important role. It’s very interesting to study the history and the features of Du-Khang in different prominent Monasteries in Leh.

History of Du Khang in Leh

The main priest or Lama of any Monastery has a very important role. He is supposed to be the representative of the actions of Buddha and that is why his position is always on a pedestal. In Buddhism the order or hierarchy is strictly followed as in more prominent Gods like Sakhyamuni Buddha, Maitreyi Buddha, White and Red Tara etc are all on an elevated platform and constructed in a much bigger size in Du-Khang while disciples, famous priests and even spiritualists are awarded slightly lower position.

Similarly in case of Du-Khang the head Lama is always seated on a throne which is golden, intricate decorated, fitted with plush red upholstery and always on a high pedestal. It’s very interesting to note the other elements in Du-Khang like the long flutes, instruments similar to sarod and the Buddhist. Generally trumpet which are played out on various occasions. Another distinctive feature of Du-Khang is its huge array of seats with neatly ordered reading tables on which religious texts are kept for chants. 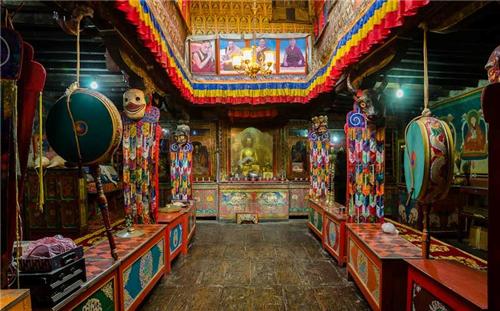 All ancillary Lamas seat on the smaller seats while normal devotees sit on wooden benches kept on Dukhang. Generally walls and ceilings of Du-Khang are covered with intricate paintings, carved images and Thangkas.

There are some distinctive features which are found in Du-Khangs of almost every Monastery in Leh.

These are beautiful paintings signifying stories, myths and lore (mostly with religious connotation) which are present in Buddhism and popular local stories. Thangkas mostly have golden vibrant embroidery and the base is silk. Thangkas of Du-Khang or assembly hall are interesting artistic objects.

The Wheel of Life or the Dharma wheel is an important concept of Buddhism and you will be able to observe it in every Du-Khang in Leh. The potential of the human mind and the cyclical nature of life are represented by the wheel. 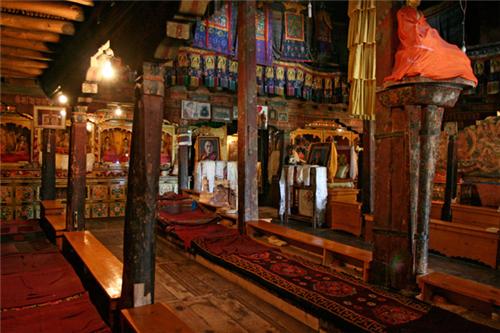 Each Monastery in Leh will have a Du Khang with several religious icons and they can be grouped together as 8 auspicious items or Ashtamangala. Lotus flower, pair of golden fishes, Mandala or the complicated knot, Dharma wheel, Banner of victory, Vase of treasures, Parasol and the Conch shell are the 8 holy symbols represented in Du-Khang.

The Monastery of Alchi and Spituk have very interesting Dukhangs.