Gurudwara Pathar Sahib is probably the only gurudwara in the world that is worshiped by both Sikh and Buddhist monks. Tibetan monks are famous for their open minded approach and they are often seen offering cookies, chips, cream biscuits and candy to their deities. 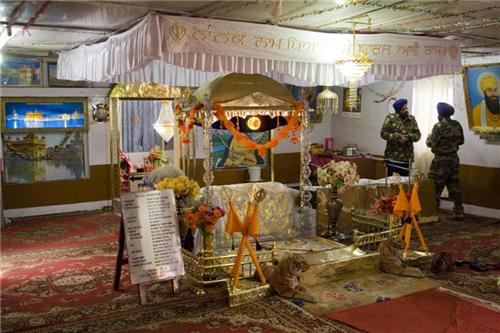 Because the gurudwara pathar sahib is situated in a predominantly Buddhist area, the monks have embraced this gurudwara and they even call Guru Nanak as guru gompka maharaj or Lama Nanak. This gurudwara is relatively unknown to the average Sikh pilgrim in India though it has been well documented by many foreigners who have visited this place.

There is a very interesting legend associated with this gurudwara. It’s a well known fact that Guru Nanak visited Ladakh during one of his spiritual journeys. As the guru sat meditatively thinking about god an evil demon chanced to see him. The demon was in the habit of slaughtering humans and it immediately threw a large boulder at Guru Nanak with the intention of crushing him to his death.

However on the route to the guru, the boulder changed into a huge mound of molten wax. Infuriated the demon became even more determined to finish off the guru Nanak by kicking another boulder in the direction of Guru Nanak. However to the amazement of the demon this boulder too got converted into molten wax unto which the demon’s foot caused a deep imprint. Seeing this, the demon was convinced that this was no ordinary man and he immediately fell to his feet and shed tears of atonement. Since then the demon has never bothered people again. 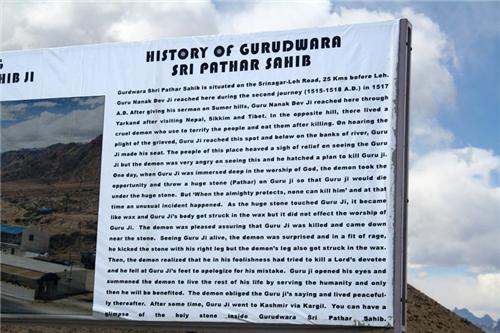 The boulder and its associated legend were both forgotten by the passage of time. During 1970 when the Leh-Nimu road was being constructed with help from Indian army the boulder was discovered again. The workers associated with the construction project had strong visions and they implored army officials to leave the rock alone. However the army officials decided to continue with their project. Ultimately salvation came in the form of locals and Tibetan monks who explained the holy significance of the rock. Finally a Gurudwara was built with the combined efforts of the Army, monks and local people.

This Gurudwara is situated at a distance of 25 km from the capital of Ladakh i.e. Leh. This is probably the highest altitude Gurudwara in the world and also the most difficult to access. On August 5th 2010 a burst of heavy rain clouds flooded the Gurudwara and it was submerged under 5 feet of water. 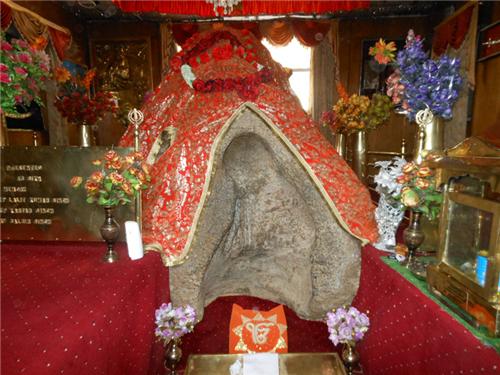 This Gurudwara is built in the memory of Guru Nanak Sahib when he travelled from Yarkhand (now in China) to Leh to discuss religion and spirituality with Buddhists. The Gurudwara contains a huge Boulder which has the iimprint of Guru Nanak Sahib’s back and head. The boulder is now inshrined inside the Gurudwara. There is a Darbar hall, Prayer Hall and a Langar Khana in the Gurudwara which is of modest proportions.

The walls of Gurudwara are decorated with hundreds of Army stone plaques and till date maintenance of the whole place is done by Army jawans.

How to Reach Gurudwara Pathar Sahib

There are cabs running from Leh to Gurudwara Pathar Sahib but they are of indeterminate frequency. The best way is to book a private car and travel over Khardung Pass (near Leh) for 25 km to reach this Gurudwara.