Leh City has many religious shrines of the Buddhists. Majority of the residents of Leh are the followers of Buddhism and this city has many ancient monasteries and many artifacts associated with Buddhism. Thousands of tourists come here to understand the essence of Buddhism and one of the most visited monasteries of Leh region is the famous Hemis Monastery. It is the wealthiest monastery of this region and Hemis Gompa is the largest gompa of all that are present in Leh Region. 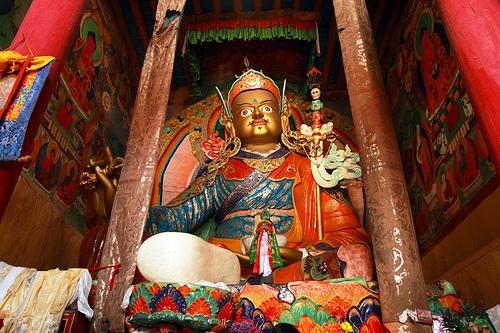 Considered as one of the most popular and ancient gompas of Leh, the Hemis Monastery existed since 11th Century AD. Due to destruction that happened with time, the renovation and repair of this monastery was done in the year 1672. The repair work was done during the rule of Sengge Namgyal, the then king of Ladakh Region. Every year Hemis Festival is organized at this monastery to show honor to Lord Padmasambhava whose idol has been installed in this monastery. This monastery follows Dugpa Kargyutpa Order.

The teachings of Tantric Vajrayana section of Buddhism are taught in this monastery and tantric workshops are performed by the monks of this monastery. This monastery has an idol that is has a copper-gilt. Within the monastery, there are stupas made of gold and silver, sacred thangkas and other items associated with Buddhism.  Those who are lucky enough to get an opportunity to stay at this monastery can attend the morning prayers of this monastery.

It is believed that Hemis Monastery was established before 11th Century AD. Naropa, the disciple of Yogi Tilopa had close association with the monastery. As per a manuscript found in this monastery, yogi Tilopa had ordered Naropa to perform twelve small tasks and twelve great tasks so that he could be enlightened. 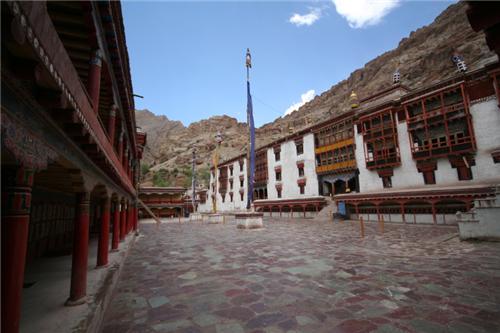 According to another popular belief, in 1630 the Hemis Monastery was actually founded by the Stagsang Gyatso during the rule of King Sengge Namgyal.

Every year in the month of June, Hemis Festival is organized at this monastery. The specialty of this festival is the sacred mask dance performed by the monks of the monastery. This mask dance or Chams are the rituals of Vajrayana section of Buddhism.  The Hemis Festival is organized to show honor to Lord Padmasambhava. Lord Padmasambhava was born in the Monkey Year.

He was born on the 10th day of the 5th Month of the year as per the prediction make by Buddha Sakyamuni. Lord Padmasambhava was born with a mission to improve and bless all the living beings with spirituality. The birthday of Lord Padmasambhava comes once in every 12 years so it is celebrated with great pomp and gaiety.

Hemis Monastery is located about 50 KM away from Leh City. It is situated on the western bank of River Indus near a place named Karu. The monastery is constructed on a hillside, secreted in a gorge and is surrounded by picturesque mountain ranges. 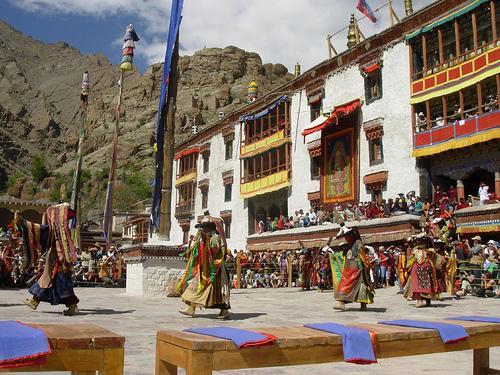 As Hemis Monastery is one of the most visited tourist spot of Leh, there are numerous accommodation facilities around this monastery. Visitors can select the one that suits their need and budget both. It is possible to get budget hotels and luxurious hotels near Hemis Monastery. Some of the accommodations available are Thongsal Hotel located at Turhung Road, Hotel Antelope at Chubi Road, Hotel Gawaling International at Changspa, and Hotel Lumbini at Fort Road.