The Monastero Likir is at a distance of 52 km from the capital town of Ladakh; Leh. It’s conveniently placed as you barely have to detour for a few km from the Leh Srinagar highway before you reach this Monastery. This place is more than a thousand years old as its date of construction was somewhere in 1065 A.D. 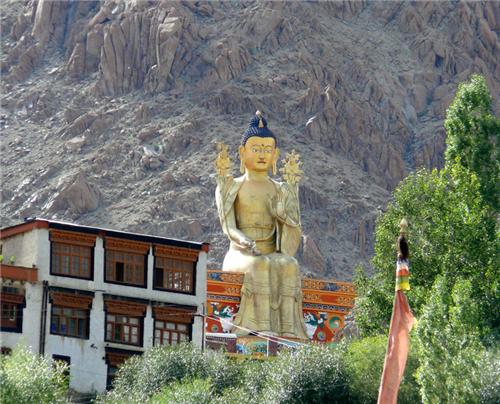 It was the Tibetan Monarch King Lahchen Gyalpo who was responsible for initiating the project of construction of Likir Monastery though the actual supervision and organization of the construction work was done by Lama Duwang Chosje who belonged to the Gelugpa set. However new additions were made in 199 when a glittering golden statue of Maitreya Buddha was added in 1999. The statue sits vertically on the roof and till date remains the principal attraction of this Monastery. Several natural calamities had damaged many parts of the Likir Monastery and different Tibetan Monarchs belonging to different periods of time took the initiative of rebuilding damaged structures. This is why the different areas of Monastery date back to different eras and have subtle differences in architectural and decorative style.

Presently there are 120 Buddhist Lamas residing here while 30 students are completing their education in the educational wing of the Monastery which is known as Central Institute of Buddhist Studies. A famous festival called Dosmochey is organized in the 12th month of Tibetan calendar and this festival runs from 27th day to 29th day. Lavish offerings, music and dance are an integral part of Dosmochey festival and this attracts tourists from all across the world.

The name Likir stands for Naga which means Encircled serpents. More specifically the Likir Monastery is built with the idea of two serpent  bodies; Naga- Raja and Nanda-Taksako. The Likir Monastery had originated from the beliefs and religious affinity of the Kadampaorder of the Tibetan sect of Buddhism. The Likir Monastery is managed by students of Tsongkhapa who was the founder of the Gelugpa doctrines in the 15th century. The Monastery of Likir is also known for its affinity and representation of water spirits and as such as deep mystical significance. 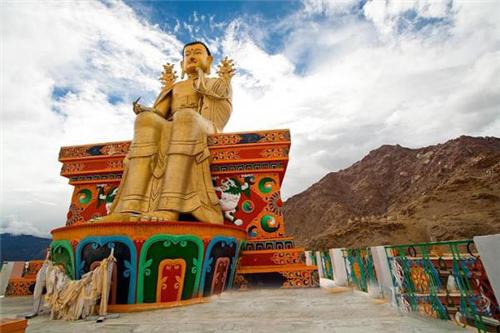 In Ladakh most monasteries are built on acres of land and they are well separated from each other. The Likir Monastery is no exception as it was built on the basis of a tiny citadel of average height with an expanded wall. The purpose of the strong and almost forbidding walls around the Monastery is to toughen out the region. Citadel Monastery structure is followed in the Likir Monastery where the chief temple will be situated at the highest point with the Monk’s accommodation below it and then the pilgrim/ visitor houses further down.

Likir Monastery is populated by 100 monks and students who stay here for gaining education and religious insight. Hindi, Sanskrit and English are taught by Tibetan academicians and scholars to these students. In fact Likir Monastery is a good educational institute in Ladakh which has affiliation to Central Institute of Buddhist Studies. The younger brother of Dalai Lama; Ngari Rinpoche was the inspiration behind this educational institute.

There are 2 assembly halls in the Likir Monastery. The older Hall is on the right side of the main patio with several seats of six rows each meant as the prayer and discourse seats of Lamas. There is a beautifully decorated golden throne meant for the main Lama of Likir. The Hall contains golden statues of Bodhisattva and Amitava as well as decorated statues of Tsongkhapa, Sakyamuni and Maitrey. Interestingly Tsongkhapa who was actually a scholar was also known as the founder of Yellow hat sect. 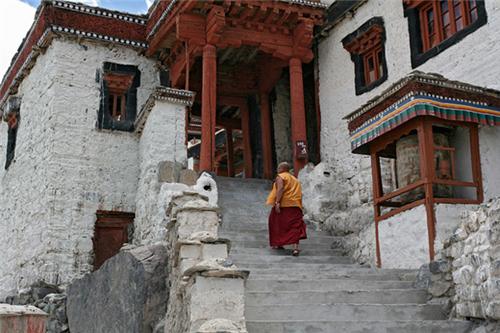 The second (newer) hall is of roughly 200 years of age contains a magnificent statue of Avalokiteswara who has 11 heads and one thousand arms. The wall on the left of the new hall has 35 intricate paintings of confessional Buddha’s while on the right wall there is a gorgeous image of Sakyamuni with his two associate chiefs. Apart from these principal figures there are lots of ancient and rare manuscripts, old costumes of Tibetan royalty and religious figures, huge Thangkas, fine examples of Tibetan Pottery in the new hall. The top floor of the Likir Monastery is again filled with well designed figures of Lamas and depictions of all the 21 emergence of the religious deity white Tara (Avalokiteswara’s partner).

There is a huge Jupiter tree in the patio which is one of a kind in India. There are ancient Thangkas and exquisite paintings hung on the Patio walls and there are lines of stained glass and frosted glass book racks which are filled up completely with religious scriptures. Upon reaching the Patio, tourists are allowed to peek into the Gorkhang (room containing protective deities) as well as the abode of the chief Lama of the Monastery. 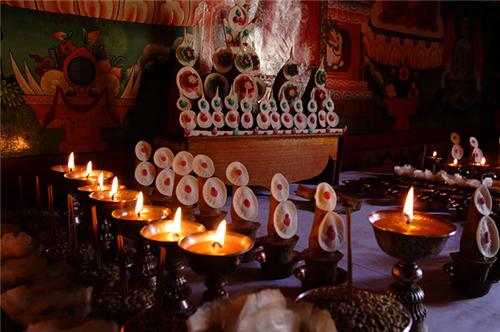 Apart from these structures there is also a big kitchen, rows of residential quarters etc. Lots of renovations and restorations have happened to the Likir Monastery over the years which gave a completely different look to Likir as compared to what it had before. Likir had also served as a fortress as strategies were mapped out behind its walls and battles were conducted for the possession of power and land. This is why Likir Monastery has rows of Citadel structures which actually protect the religious confluence from attacks.

How to Reach Likir Monastery

The Likir Monastery is to the west of Leh. In case you are traveling from Leh to Likir Monastery you will have to cover a total distance of 52 km. the nearest village is Saspol from Likir Monastery and it is situated in Northern part of Srinagar Leh Highway. Private jeep hire is the best option if you want to reach this monastery as about 10 km of the road is pretty wild. You can also directly hire a cab from outside the Leh airport to reach the Likir Monastery. Average fare of an airport taxi is from INR 1500 to INR 2000.

As with other tourist destinations in Ladakh, the Likir Monastery is best visited between June to August.