The Monuments in Leh like every other object in Leh have deep historical significance. The Palaces, Forts, Castles, Museums and Halls in Leh are so beautiful and old that they have been recorded in several documents and videos made by National Geographic Channel as well as other Travelers Mags. 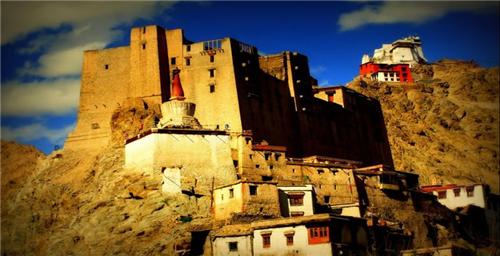 www.hardevmotors.com
If you ever visit Leh then you should make a point to visit the amazing monuments and revel in the rich history and heritage which they signify.

The Leh Palace is similar in architectural style to the famous Potala Palace in Tibet. The 9 storey sand colored dune places were built under the guidance of 17th century monarch Namgyal Sengge. The Leh Palace was stripped of power when the royal family fled to Stok in the year 1846. There are several darkened corridors, ladders, spiral staircases which give the palace an elusive charm. There is a small prayer room along with a single room exhibition stand containing pictures of Jammu and Kashmir. Don’t forget to note the presence of Stupa Namgyal, the Chamba Lhakhang and the Chandazik Gompa which has the representation of 1000 Buddha’s.

The Tsemo Fort in Leh is visible from almost all corners of the town. The fort has important historical facts of Ladakh’s political and strategic history attached to it. There are hundreds of red flapping prayer flags which distinguish the Tsemo Fort from afar. Don’t forget to check out the Tsemo Gompa which consists of 2 separate and beautiful fifteenth century shrines. There is 8 m tall golden Maitreya that is an important attraction of the place. 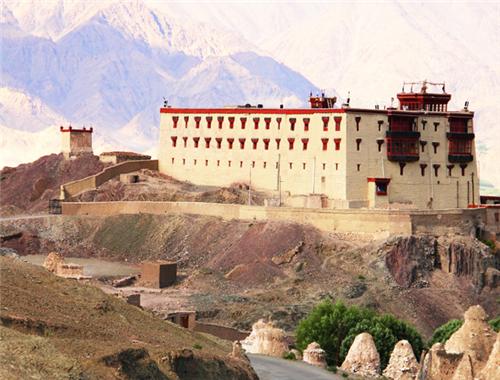 There is small Monastery where the Leh Royalty still performs religious rites inside the Palace Complex. Royal artifacts like crowns, gemstones, costumes, robes, books, antiques and prayer instruments along with other royal memorabilia are present in the Palace premises for the privilege of tourists.

Community Center in Leh has sustained efforts about educating all foreigners about peaceful co existence, cultural harmony and spiritual magnificence. There are regular screenings of remarkable documentary movies that are related to the history, geography, culture and art of Leh. If you are interested in intellectual discussions and cinematography then visit the Community Center to watch rare short films and videos on Leh. Every Saturday there is special screening for tourists in the tourist season between May to September.

Naropa Royal Place can be seen from a distance because of the flaming red Buddhist prayer wheels that are present in full display outside the palace. The Naropa Royal Palace is where the Namgyal Royal Family used to reside and stay in the summers. The Palace is prettily perched on a green ridge which has many Buddhist paintings, inscriptions and carvings set in stone displayed on the base of the ridge. If you are a photography lover then a visit to the Naropa Royal Palace is recommended as it is extremely photogenic. 2013-2014 saw a lot of reconstruction work at the Naropa Royal Palace. The main attraction here is the huge gleaming smiling Buddha statue (that dates back to 1645) and is made of gleaming copper.

Hall of Fame in Leh

The beautiful and unusually shaped Hall of Fame in Leh occupies a proud and central position in the town of Leh. The base of this monument is colored warm brown with a protruding dome in lime green and cream. Many people forget about the difficult lives and extreme sacrifices made by the Indian soldiers when they fought difficult wars in Kargil. The Hall of Fame in Leh chronicles the lives of these heroes as photographs, maps and memorabilia of war are displayed here. In another section of the museum the rich cultural history of Ladakh and its people are displayed. The Flora, Fauna, rituals, festivals, dresses and headgear of tribes of Ladakh are displayed here. The top floor of Hall of Fame has Indian Army ammunition on full display.

The Riasi Fort is strategically situated right above the famous Leh Palace and the Tsemo Gompa. This fort was earlier known as General Zorawar’s Fort where the Dogra warriors used to collect a large portion of their money under the leadership of Zorawar Singh. As of now the Fort has been renamed Riasi Fort and it has a good collection of stamps, coins and treasures dating back to the ancient Royal Family. 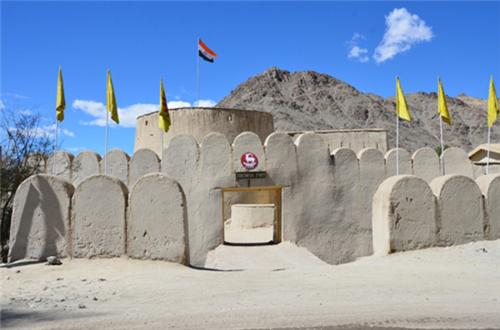 This Fort shows remarkable religious harmony as it hosts a Mosque as well as Kali Temple inside its premises. This is also an excellent place for photography.

Leh is home to a lot of Monasteries but only some like the Thiksey Monastery have achieved the status of a famous monument. The Thiksey Monastery is also known as the leader of all monasteries as it is supposedly the most famous monument of all in Leh. This Monastery is the home of a 15 m long statue of the Buddha which is till data believed to be one of the largest statues in the world. There are many precious artifacts inlaid with silver, gold, brass and precious gems inside the Monastery. Thiksey Monastery hosts many beautiful Thangkas which are painted in an intricate way and date back to more than a century. This Monastery is also referred by archeologists and architects as one of the most beautiful examples of Buddhist architecture. This is a monument recognized by United Nations Heritage Building List.

Thus, the monuments in Leh are promising enough for the people who love to explore the rich archeology and architecture of Leh.

Comments / Discussion Board - Monuments in Leh