The Pangong Lake is one of the most beautiful places in Ladakh and it is known as the tourist paradise. The serene blue water and the mountain ranges reflecting in them make the place look like tranquility personified. Perhaps this is the reason why Discovery India and National Geographic have shot entire documentaries near Pangong Lake. 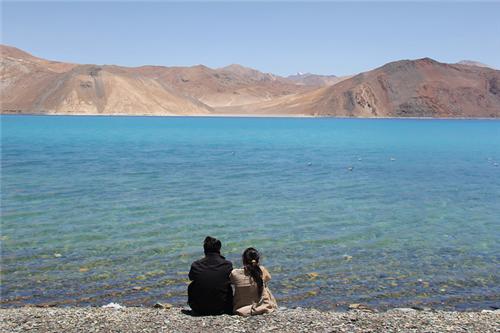 farm7.staticflickr.com/6134/5939960461_506aa93959_z.jpg
Top geologists of the world vouch for the fact that this lake contains some of the rarest forms of rocks of the world. The exotic variety of birds found near the lake is also a source of inspiration to ornithologists, bird watchers and nature lovers.

Flora and Fauna of Pangong Lake

The water in Pangong Lake like most other lakes in Ladakh is brackish. The salty nature of water means that it is unfit for human consumption and washing. In fact this lake was used as a hotspot for salt mining till two years back. The brackish quality of water has not allowed fish or other forms of aquatic life to thrive in the lake. Recently due to the sudden spurt of tourism activities in Ladakh several camps are now organized on the banks of Pangong Lake. There are lots of ducks and gulls which can be seen frolicking in the waters of the Pangong Lake at all times. Feeding the white fan tailed ducks has become a prominent tourist activity now at the lake. 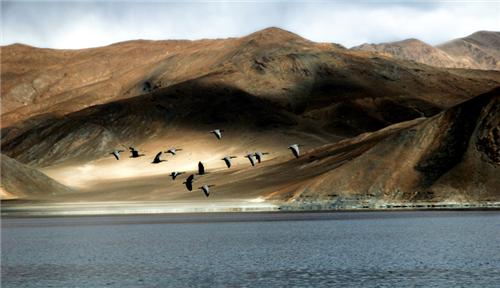 Very few people know that the desolate land of Ladakh is home to a large number of migratory birds who come here to specifically breed in the romantic settings of the Ladakh lakes. The Bar headed Geese and the Brahmini Duck with its aristocratic red and silver crest is a common sight here. On the banks of the Pangong Lake between July to September there are a lot of sightings of rare migratory birds. If you sit on the Pangong Lake banks for a long time, you will be able to sight the occasional golden tailed kiang and the bushy marmot slip by.

Pangong Lake in Ladakh is known for its exceptional geographic position. Its spectacularly positioned right across the famous Changla Pass in Leh. The altitude of this lake is 4500 meters which makes it one of the highest altitude lakes in Asia. The length of the lake is 134 km which makes it one of the longest lakes in the world and the most longest lake of Ladakh. Geologists say that the Pangong Lake is actually a descendant of the ice age when huge chunks of ice were floated down by an avalanche where they subsequently formed lakes. The water of the Pangong Lake is brackish and is very salty to taste. 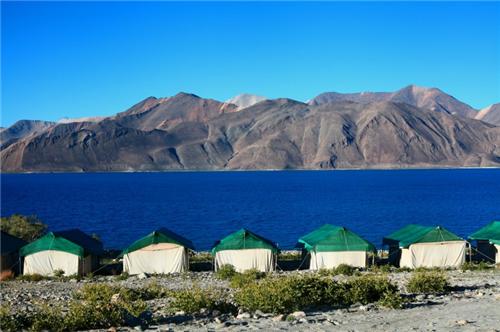 The Pangong Lake is flanked by the golden skinned Pangong mountain range to the north. High peaked tips and plunging valleys of the ranges offset by the gorgeous blue of the Lake makes for a truly photogenic sight.
Prepare yourself mentally before you head off to the Pangong Lake. Because of the extreme high elevation the air is rarified making it difficult to breathe for people who have respiratory problems.

You can reach Pangong Lake after travelling for five hours from Leh. The pretty villages of Shey and Gya have to be crossed first as the car travels along Changla Pass Road. Finally you will reach the lake after crossing the river referred to as Pagal Naala.