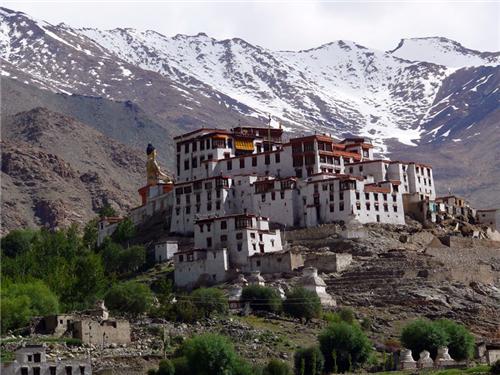 Leh is known for its monasteries. You can not stop yourself from paying a visit to the beautiful and peaceful monasteries in Leh.

Bearing high resemblance to the Potala Palace, the famous Thiksey Monastery is one of the biggest religious spots of Leh. This Monastery is 12 storeys’s high and hosts a 50 feet high statue of Maitreya Buddha that is a great landmark in itself. Murals, Thangkas and holy Stupas of Buddhism dot this beautiful Monastery which hosts lot bejeweled precious metal statues. The residences of Lamas and Monks are arranged in order of importance inside the Monastery Complex.

How to Reach: Travel along for 20 km along the Leh Jammu road and then climb up a steep hill to reach 12 storied Thiksey Monastery.

The Phyang Monastery is the most important place of worship for the Dringungpa sect of Buddhists. Incidentally this sect was believed to possess many mystical and tantric powers which gave them cult reputation. There is a lot of dispute about the origin of Phyang Monastery which makes this place an object of interest to the historians and travelers. There are a lot of rare books on Leh’s history hoarded inside the small library in Phyang Monastery.

Alchi Monastery in Leh is very important religious spot. It is situated right beside the Gurudwara Pathar Sahib in the pretty village of Saspol. This Monastery is very old and dates back to 1000 A.D and was established by famous Chinese scholar Rinchen Zangpo. This is perhaps the only Monastery in Leh which does not require one to climb atop a hilltop. The Likir monks manage this Monastery and you can politely request one to give you a guided tour of the place. The 11 headed Avalokiteshwara sculpture along with beautiful murals of Lord Buddha are the principal attractions of Alchi Monastery. 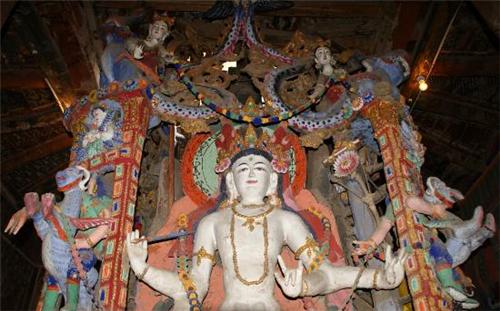 Likir Monastery is situated near the mystic and powerful Indus River in the scenic village of Saspol. Likir Monastery or Likir Gompa is an ode to the holy Naga of Buddhists and the serpent monarchs Nanda and Taksako. Like Hinduism, Buddhism has the practice of worshiping snakes and anybody interested in religious Mythology will find the Likir Monastery a fascinating experience. Incidentally this is one of the oldest mystical religious spot in Leh.

How to Reach: Travel along for 60 km along the Western road from Leh and then climb up a hillock near Saspol Village to reach Naga Monastery of Likir.
Timing: Open on all weekdays from 8.00 a.m. to 6.00 p.m.

Leh and the entire region of Ladakh have seen a lot of strife and warfare and Shanti Stupa signifies the return of peace and love to this gentle land. This is a place that doesn’t belong to any particular religious sect though its foundations were laid down by Gyomo Nakamura Bhikshu who was a Buddhist hailing from Japan. People from all religions go there to pray and revel in its quietness and spirituality.

How to Reach: Drive along to the Chamspa district of Ladakh to reach the stately white dome of Shanti Stupa.
Timing: Open on all weekdays from 5.00 a.m. to 9.00 p.m.

The earliest alive and powerful Gompa of Leh; Yung Drung is a source of fear and awe to the villagers of Lamayaru village. Fearsome Mandalas and tantric Gods line the Gompa of Yung Drung and unlike the gentle Buddhist Monasteries this religious spot is only for the brave hearted. Many powerful Buddhist Tantric spirits are still said to reside in this Gompa which is why Naropa Yogi’s blessing is sought by everybody before entering the premise of the Gompa.

How to Reach: Drive for 4 hours from Leh to reach Lamayaru village hosting the beautiful and fierce Yung Drang Gompa.
Timing: Open on all weekdays from 6.00 a.m. to 7.00 p.m.

Spituk Monastery is a source of great wonder and devotion to the Hindus as well as Buddhists as it is dedicated to Goddess Kali along with Tibetan Tantric Gods. This Monastery dates back to 1040 and has undergone many reconstruction works. Now it is run by the Yellow Hat Sect in Buddhism and is a center for religious and cultural activities in Leh. Visit this Monastery to see some of the earliest manifestations of Buddhist art. 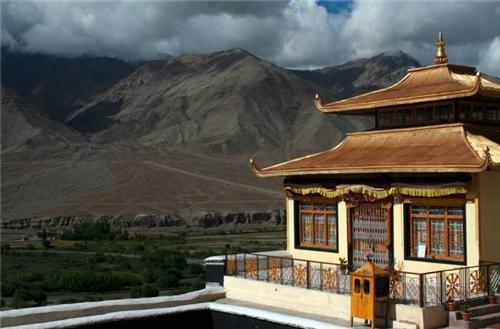 How to Reach: Drive 18 Km away from Northern direction of Leh to reach the Monastery Spituk of Gelupka order.
Timing: Open on all weekdays from 6.00 a.m. to 7.00 p.m.

Samastaling Monastery will charm you from afar by its unique and beautiful color combination of red, gold and pure white and a thousand flapping crimson flags. It’s one of the more peaceful and spiritual religious places in Leh presided by the reincarnation of Bakula Rinpoche. There are beautiful Thangkas, Murals and religious framed scripts dotting the walls of Samastaling Monastery. The Dharma-Chakra and the 4 Celestial Guardians are the most important parts of this beautiful Monastery. Lama Bakul Rinponche (who in the re-incarnated form is only 7 years old) lives in a guesthouse alongside the Monastery.

How to Reach: Drive 25 Km away from Eastern direction of Leh along to Nubra Valley’s village Pamanik to reach the Monastery Samastaling.
Timing: Open on all weekdays from 7.00 a.m. to 8.00 p.m.

Namgyal Tsemo Gompa in Leh is a very beautiful 15th Century situated on top of the Tsemo hill which lies just beside the Tsemo Hill in Leh. There is a gorgeous pure gold statue of Namgyal Tsemo who is also associated with Maitreya Buddha and Sukyamuni. After Haider invasion in 1531, the Namgyal Gompa was built and it was believed to act as guardian deity and safeguard against all evil and demonic forces. The Gongkhang is the best part of this Gompa as it signifies Tibetan and Buddhism spiritual elements.

How to Reach: Travel along for 20 km along the Leh Jammu road to reach 15 century Namgyal Tsemo Gompa Monastery.
Timing: Open on all week day’s from7.00 a.m. to 9.00 p.m.

The Phuktal Monastery in Ladakh presents a mesmerizing experience to devotees and religious minded people. There are 70 monks living here in this Monastery which is built right on the mouth of a hill. There is a cave within the Monastery Complex which is supposed to contain a healing water stream that is also worshiped by local people. The 12 century renowned theologies Gangsem Sherap Sampoz built this dazzling Monastery which is filled with intricate carvings and dazzling Buddhist Murals. 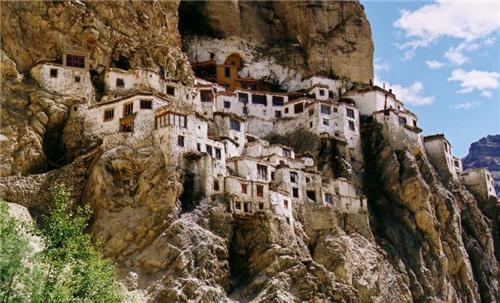 How to Reach: Travel along for 30 km along the Leh Jammu road to reach 12th century Phutkal Monastery.

Basgo Monastery is situated on the erstwhile ruling site of the Ladakhi royals of the 15th century. The Basgo village has a lot of European influence in its architecture and the Basgo shrine is a pure dedication to Maitreya Buddha. The Monastery itself is very majestic as it is perched on top of a deep gorge. There is a temple by the name of Ser Zang which houses famous manuscripts which are inlaid in gold and copper and offset by gems. There are beautiful 16th Murals which are situated in the premises of Basgo Monastery.

How to Reach: Travel along for 40 km along the Leh road towards Basgo Village to reach Basgo Monastery which is perched on top of a gorge.

The Stakna Gompa in Leh is inspired by the shape of a tiger’s snout hill called Stakna or the Tiger. This Monastery despite its fierce name is a peaceful and idyllic religious spot which draws theologists, God lovers, religious researchers and travelers from all across the globe. There are an enviable range of Buddhist musical instruments on full display inside the compound of Stakna Monastery. The Bhutan based Saint Chosie Jamyang Palkar was responsible for laying the foundation of this Monastery. The gentle curve of the gleaming Indus river and majestic mountain peaks give the Monastery an ethereal look.

How to Reach: Drive along for 20 km towards the Leh Airport road to reach Tiger hill perched Monastery called Stakna Monastery.

The Hemis Monastery is situated at an altitude of 3740 meters and is right beside the bank of the mighty river Indus. The Hemis is supposedly one of the most ancient Monasteries in Leh and is actually situated in Karu Village which is 35 km away from Leh. The Monastery is beautifully nestled inside the mountain and it’s a tough drive. However the Hemis Monastery complex houses one of the best religious memorabilia collection in Leh and it contains many documents, murals, thangkas and books of immense spiritual value. There is a souvenir shop on the ground floor selling Tibetan prayer beads. The Hemis Monastery offers the opportunity of seeing the world’s oldest Thangka which is unfolded only once in 12 years. 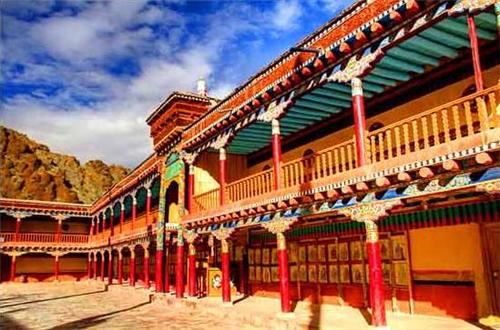 How to Reach: Travel along for 35 km from Leh in the direction of Stok Mountain to reach Hemis Monastery.
Timing: Open on all week days from 9.00 a.m to 9.00 p.m.

This is a little known Gompa which has the world’s only butter candle sculpture which is designed by the head Lama. This Gompa was built as an ode to the memory of Chemrey order monks who are now extinct. Inside this Gompa you will see worshippers and Lamas dressed in Kashmiri costumes and Kashmiri headgear. At the Thak Thog Gompa you will find a confluence of locals who engage in traditional Ladakh style dance and dramas. This Gompa is a must visit religious spot because it has both Islamic and Hindu influence in its design.

How to Reach: Travel along for 60 km along the Leh road towards Sumseg Village to reach Thak Thog Gompa.
Timing: Open on all week days from 8.00 a.m. to 7.00 p.m.

It is not that Leh only has monasteries it has a gurudwara as well.

You will be surprised to see a Gurudwara in the middle of Buddhism heartland like Leh and even more amazed to know that the fame and following that this Gurudwara commands. The Gurudwara Pathar Sahib has a lot of interesting myths attached to it and supposedly Guru Nanak Ji had blessed this place by actually staying in it for a number of days. The speech of Guru Nanak Ji in the form of Mool Mantra is played out continuously at this religious spot which days back to 1517. 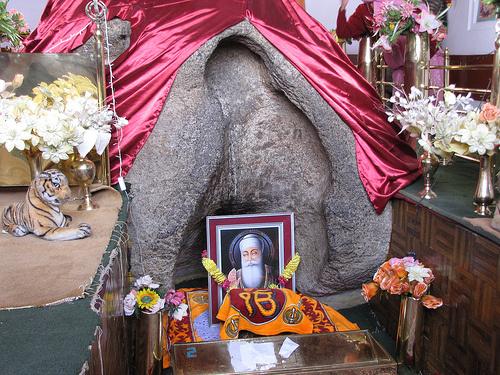 How to Reach: Travel along for 4 hours along the Leh Kargil road and then climb up a steep flight of stairs to reach Gurudwara Pathar Sahib.

Leh reflects unity in diversity with its mosque.

Religious harmony and brotherhood existing between Muslims and Buddhists in Leh is demonstrated by the presence of the Jama Masjid in Leh. This beautiful Masjid which is operated by both Muslims and Buddhists stands in the Main market of Leh. Mughal architecture is followed here for the construction of the Masjid which is incidentally open only for men (of all religions and castes). The Jama Masjid is a symbol of Islamic liberalism and communal harmony.

How to Reach: Walk along to the main market of Leh to reach the stately Jama Masjid.
Timing: Open on all weekdays from 5.00 a.m. to 9.00 p.m.