What do you expect to see when you take a tour of Leh and Ladakh? You will obviously expect the gorgeous mountains and monasteries to be witnessed. But what if you get to witness an amazing Stupa located in the hilltop! This is exactly what our article will cover. Shanti Stupa, a Buddhist stupa located in one of the hilltops in Ladakh city can be a great spot for tourists. Let us take a look on the features of this stupa.

History of Shanti Stupa in Leh

The most interesting fact about this stupa is that this was constructed both by the Ladakh Buddhists as well as the Japanese Buddhists. In 1914, Nichidatsu Fujii’s mission was to maintain peace and propagate Buddhism in India. It was his idea to construct a temple that will be the sign of peace as well as mark the presence of Buddhism culture in India. But this stupa was actually built in the year 1983. 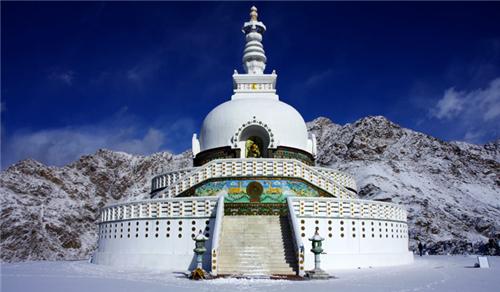 The main founders of this stupa were a Japanese Buddhist named Bhikshu Gyomyo Nakamura and a Ladakh Buddhist named Kushok Bakula. In the year 1984 Indira Gandhi the Prime Minister of India approved the establishment of a road leading to this Stupa. Finally in the year 1991 this Stupa was inaugurated by the present Dalai Lama.

Architecture of Shanti Stupa in Leh

This stupa was also known as the “white domed” stupa for it colour. The stupa is a two storied building. There is a beautiful idol of Lord Buddha sitting on a platform which shows the Dharmachakra of Buddhism culture. This idol is present in the first floor of the stupa. In the second floor of the stupa there are images depicting the entire life story of Lord Buddha- his birth, his activities and finally his death. 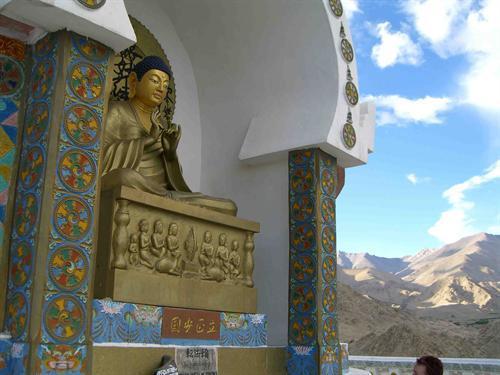 This stupa also consists of an image of Dalai Lama with miniature paintings of Lord Buddha at its bottom. The beautiful white colour of the stupa marks the promotion of world peace. The main aim of building this stupa was to promote world peace and celebrate 2500 years of Buddhism religion.

Places to See nearby Shanti Stupa

Places to Eat nearby Shanti Stupa 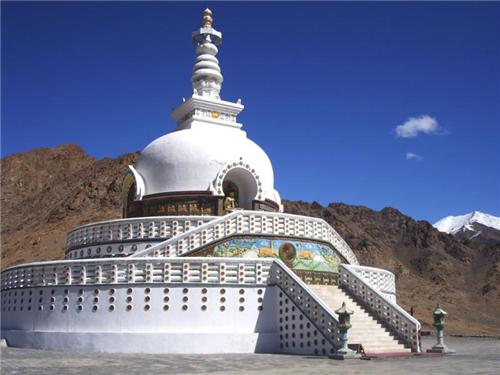 Location of Shanti Stupa in Leh

The beautiful Buddhist stupa, Shanti Stupa is located on the top of a hill in Chanspa in Ladakh city. This amazing stupa is located at a height of 4267 metres above the sea level. The distance between this Stupa and Leh is just 5 km. This stupa is situated at such a place that the entire Leh district can be viewed from this place.

The most favorable time to visit this stupa is between 5 am and 9 pm. The most amazing views from this stupa are the view of sunrise and sunset. If you are planning a visit to this stupa then definitely watch either of sunrise or sunset. The stupa looks best at night with the glittering lights. In the daytime although these lights are unavailable yet the surrounding view can be seen properly. 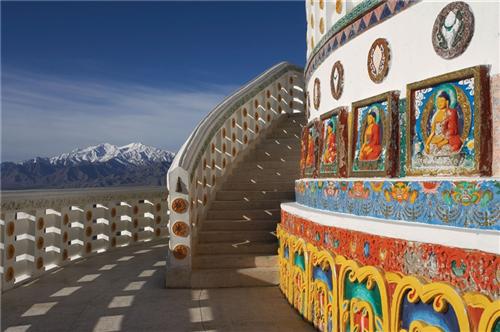 How to reach Shanti Stupa

The nearby airport to this stupa is the Leh Airport that is 4.9 km away. You can take cab and other bus service from the airport in order to reach this palce. Jammu Railway Station is the nearby railway station from this stupa and you can get bus services from this station to reach Leh.

Explore the amazing beauty of Ladakh by paying a visit to this stupa. Enjoy every bit of your travel by traversing through this famous stupa of Ladakh.