There are lots of monasteries, temples and shrines nestling amidst the majestic yet fierce terrain of Ladakh but none of them have the distinctive features of the powerful Vajra Bhairav Shrine. This is a 15th century shrine which is situated near Leh and draws a lot of tourist interest.

The shrine called Vajra Bhairav Shrine is one of the very few structures in Ladakh which is built to please a tantric deity who had great powers. This deity is a member of the Buddhism religious order called Gelug-pa and it is an anomaly amongst the normally placid and gentle Gods of Buddhism. There are supernatural forces which can have a potent effect on viewers and this is why the public is only allowed to glimpse the deity once in every year. The deity is mostly kept inside a chamber which is only entered by religious priests of the highest order. 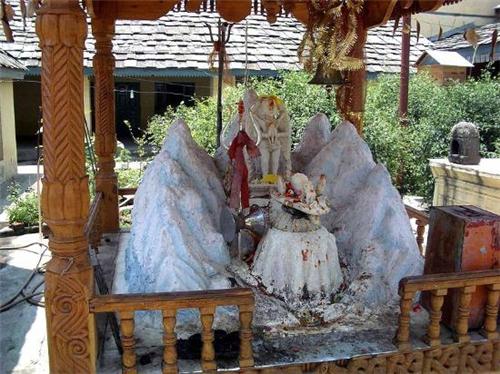 The chamber of Vajra Bhairav Shrine is covered with ancient paintings which depict myths and legends associated with this shrine. Some of the pictures are of a terrifying nature and they are very different from colorful yet innocent depictions found in Gompas in Ladakh. The Vajra Bhairav Shrine is rightly called the “Temple of Horrors”. The fierce idols in this shrine inspire feelings of instant devotion in the hearts of onlookers. Every devotee who enters the gate of this terrifying yet holy shrine has to practice deep meditation before entering.

The Vajra Bhairav Shrine is one of the oldest shrines in the region of Ladakh and it attracts tourists from national and international borders. The collection of weapons, fierce masks, religious iconography and old Thangkas with illustrations in gold and silver are present in this shrine. The reigning Gods of this one of a kind shrine are Kali (popular Hindu warrior Goddess) and the Tibetan supernatural deity Vajra Bhairav.

The temple of Vajra Bhairav was constructed in the 15th century and was initially maintained and operated by Kadampa School. Later this shrine was conferred to the Gelupka order and it was then maintained by Monarch Gragspa Bumideit. The paintings were mostly made under the patronage of the monarch and they showcase the unique culture and tradition of Ladakh. The shrine overlooks a tiny town made up of small huts and red bricks.

The main Deity of the Vajra Bhairav shrine belongs to most potent levels of Tantric Vidya (knowledge) and this is why it is conferred with many supernatural powers. Such is the potency of these powers that the deity is not allowed for public viewing to members of the general public except only for one day in the entire year. Every other day, devotees who approach the temple have to content themselves with viewing the other deities in the shrine. The guardian deity with tantric powers or Anuttarayoga Tantra is placed protectively inside closed doors. Most localities feel scared of looking directly at the face of the deity.

There are three fierce deities named Guhyasamaja, Vajrabhairava and Chakrasamvara inside the shrine who have supernatural powers. Deities have to be worshipped in a particular and strict way and they cannot be approached by anybody who doesn’t have proper knowledge about tantric vidya.

When you enter the temple complex you will find a strange power emanating from the bodies of the potent deities there. If you happen to visit the inner shrines then sometimes the power will overwhelm you and you will find yourself helpless in its grip. This is why the shrines should be approached only after a lot of caution as they may produce many changes in your life. According to Tantric doctrines such shrines have the power to completely transform the lives of devotees who approach them after preparation, meditation and amassing knowledge about these subjects. Often there are lots of devotees seen outside the shrine taking help of tantric to purify and strengthen their souls before setting feet into this temple.

You can enjoy the rare architectural wonder of this shrine as it is completely different from the usual Gompas and temples situated in Ladakh. The imagery and iconography of the Shrine has been covered by many travel magazines and lots of documentaries have also been made on it. The Vajra Bhairav Shrine is on top of a cliff which is a whooping 3505 m above sea level. This enhances the beauty of the shrine by providing it with a magnificent view.

The shrine of Vajra Bhairav is situated amidst the rough unforgiving terrain of Leh and is not accessible at all times of the year. The tourist season of Leh is from June to September and its best that you target this time for paying a visit to this powerful shrine. Make sure that you obtain prior information about the day selected for public viewing of the inner shrines of Vajra Bhairav.

The months from November to March bring extreme cold climate to Leh and there is regular heavy rainfall along with snow. Many roads are blocked due to snow so tourists are advised to make the program during this time.

How to Reach Vajra Bhairav Shrine